Catholic Diocese of Enugu State has distanced itself from the outburst of Reverend Ejike Mbaka, the director of adoration ministry against the former governor of Anambra State and presidential candidate of Labour Party in the 2023 general election, Peter Obi.

Mbaka who is widely known for his controversial nature and love for money while addressing his congregants at his adoration ground, described Peter Obi as a stingy man who will never become Nigeria’s president.

However, Enugu Catholic diocese in a statement condemned Mbaka’s inflammatory remarks, adding that the views the troublesome priest expressed while addressing his members were solely his personal opinion and do not in any way represent the position of the church.

Below is the full statement 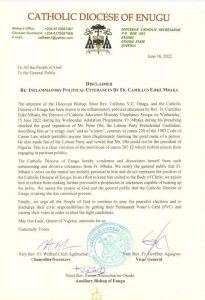