Preponderance of the North, Ojukwu’s candid observation ignored by IPOB.

Many people on social media do not understand what they read. I read Ojukwu and I listened to what he said. He admitted that the British actually screwed up the Igbos and the Yorubas by placing them in a political union with the Northern Nigeria in a way that resulted in the preponderance of the North over the rest of the country.

If you’re normally inquisitive, you will rush to the dictionary to understand the meaning of the word preponderance. And then, you apply it in the context of the subject matter.

By preponderance of the North, Ojukwu was admitting the basic truth, that given the arrangement that the British foisted upon us, the North will have a veto power over whatever political moves the Igbos make, whether it is a move to restructure or a move to secede. In other words, you with need the blessing of the North or wage a war in order for the Igbos to have their way on anything. And if you choose the option of war, the odds are against the Igbos. That was what Ojukwu was saying. Unfortunately, all the supposed supporters of Ojukwu didn’t understand him.

Biafra cannot defeat the North in any war. The reality is so unmistakable. Even if the Biafran forces successfully advance all the way to Abuja, occupying Kogi and Benue, they will not have the resources to protect their supply line from Nsukka all the way to Abuja. And the Northern forces can retreat all the way to Kaduna, Kano, and Sokoto without being forced to surrender. Anyone with basic knowledge of military operations will understand this. And basic commonsense will inform you that war results when two sides cannot agree and none is willing to compromise.

Does the preponderance of the North mean that the Igbos are forever doomed or that the North is invincible? No. There are a number of factors and scenarios that can alter the situation. First, the North may not be able to always maintain unity among different factions within it. For instance, the middle belt is getting alienated from the core North over instabilities in their areas. Second, the insurgency in the Northeast places the North in a fractionated posture. Third, the worsening of security situation and instability in the North will push the international community to lend its support to the minority voices clamoring for change thus modifying the preponderance factor. Fourth, the effect of poor governance by the Northern elite over the years is eroding their people’s confidence in the Northern elite, and thus making their population more amenable to change. Diplomacy is the means to harness these factors to the advantage of the minority. Diplomacy is the weapon you need to win if you are not a superior military power. The Igbos need to be diplomatic. I wonder why they seem to ignore diplomacy completely.

Unfortunately, the Igbo are unorganized, without a clear vision, not united, and highly emotional about everything. They need to restrategize. Note that the Igbos are not necessarily more disorganized than others. They just happened to be the group in the greatest need of deliberateness, organization and calculated moves because they have been the underdog since 1967.

The map below shows the North South of Nigeria and gives an idea of the meaning the term preponderance of the North. 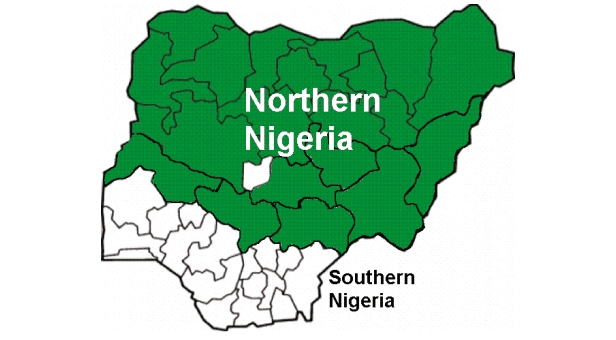