A Nigerian man accused of multimillion-dollar fraud and money laundering by the United States was kidnapped by the FBI from Dubai, his lawyer says.

Ramon Olorunwa Abbas – known to his 2.5 million Instagram followers as Ray Hushpuppi – and another cyber-heist suspect Olalekan Jacob Ponle (aka Mr Woodberry) were arrested in Dubai, where they lived, in June.

They then appeared in a Chicago court on 3 July.

The United Arab Emirates has no extradition treaty with the United States but Dubai police said they had been extradited to the US.

A spokesman for the US Department of Justice told the BBC that Hushpuppi was expelled from Dubai and was not extradited. He did not answer how he ended up in US custody.

What does Hushpuppi’s lawyer say?

Mr Abbas’ lawyer Gal Pissetzky told the BBC that his client, who posts on Instagram about his extravagant lifestyle, was not a criminal and had made his money legitimately.

“He is a social media influencer with millions of followers, with millions of people that respect and loved him, and he loved them, and that’s what he did. In today’s society, that’s a business,” he said.

Mr Pissetzky admits that he is not “100% familiar” with social media and his children consider him too old but he knows “that’s how people make money today”. 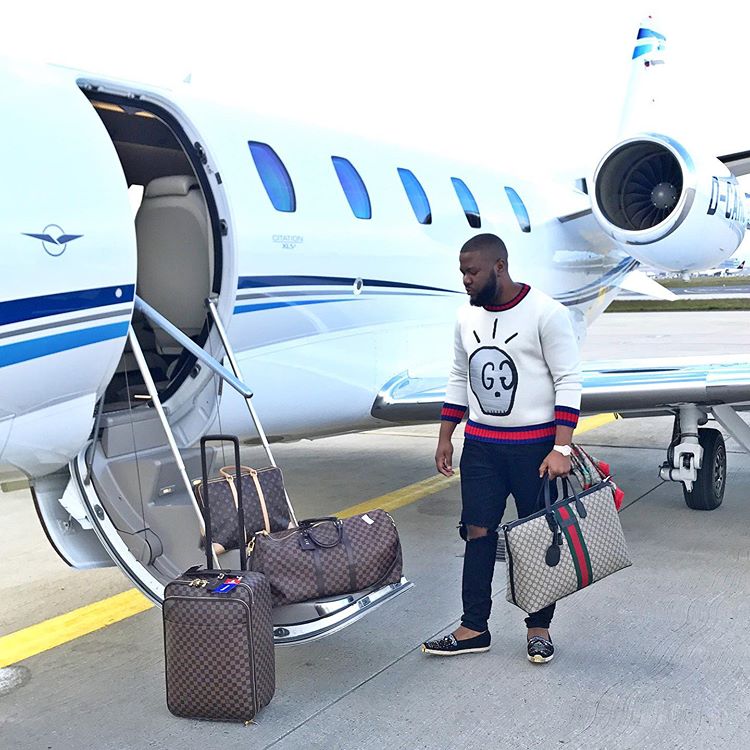 The Chicago defence lawyer’s argument that Hushpuppi was paid by designer brands for promotion has set the stage for what promises to be a long trial in American courts.

The Federal Bureau of Investigation (FBI) accuses Mr Abbas, 37, of conspiring to launder hundreds of millions of dollars from frauds known as Business Email Compromise (BEC) and other scams.

Did the US act legally?

It is the latest high-profile fraud case involving a Nigerian national in the United States but his lawyer says the US had no authority to transport him from Dubai.

“In my opinion, the FBI and the government here acted illegally when they kidnapped him from Dubai without any legal process to do so,” Mr Pissetzky told the BBC.

“There was no extradition, there were no legal steps taken, there were no court documents filed, it was simply a call to the FBI. He is not a citizen of the United States, the US had absolutely no authority to take him,” his lawyer says.

But the Dubai police said in a Facebook post that the FBI director had thanked them for extraditing the two men.

“You’ll have to ask them about why they called it an extradition,” the US Department of Justice (DoJ) spokesman responded in an email.

In a statement about Mr Abbas’ initial court appearance, the DoJ said “FBI special agents earlier this week obtained custody of Abbas and brought him to the United States” without giving any further details.

Mr Pissetzky is not convinced.

“If Dubai wanted to expel him, they should have expelled him back to Nigeria. I’ve never heard of anything like that. That is the real story here.”

What is he accused of?

Ray Hushpuppi was already popular on Instagram for his luxurious lifestyle documented exhaustively on his page but he has gained another 100,000 followers since his dramatic arrest.

A complaint against him filed in court accuses Mr Abbas of leading a transnational network of cybercriminals whose targets included a US law firm, a foreign bank and an English Premier League football club.

Email scams typically try to steal an individual’s personal information, or to defraud them by impersonating a legitimate business contact and tricking the target into sending money into a wrong account.

They’re sometimes called 419 scams, after the relevant article in the Nigerian Criminal Code.

How a 419 and romance scam works

The affidavit claims that Mr Abbas conspired to launder $14.7m (£11.7m) stolen in a cyber-heist from a foreign financial institution in February 2019.

It did not name the institution by name but a bank in Malta reported losing the same sum to hackers that same month.

The bank did not respond to a request for comment.

The FBI says $1.7bn was lost by individuals and companies in business email compromise scams in 2019 alone.

“This case targets a key player in a large, transnational conspiracy who was living an opulent lifestyle in another country while allegedly providing safe havens for stolen money around the world,” United States Attorney Nick Hanna said in a statement when the charges were announced.

But Hushpuppi’s lawyer says his client earned his money by monetising his large social media presence. He refused to discuss how he was getting paid for legal fees or the source of Hushpuppi’s money.

Mr Pissetzky says the case could last several months, even longer than a year.

What about ‘Mr Woodberry’?

Mr Ponle, the other Nigerian arrested in Dubai and currently in custody in the United States, is also preparing for trial.

His lawyer Michael B Nash told the judge at a detention hearing on Thursday that he had not had a chance to speak to his client. When he was allowed 15 minutes in a virtual breakout room to confer with Mr Ponle, he returned to request a new date for the hearing.

“I really don’t have any comment right now, I have to learn the facts about this case,” he told the BBC.

Mr Ponle, 29, ran the “Mr Woodberry” Instagram account but the FBI says he used the alias “Mark Kain” in emails. He is facing charges of conspiracy to commit wire fraud.

The complaint against him says one Chicago-based company “was defrauded into sending wire transfers totalling $15.2m”. He is accused of converting some of the proceeds into a Bitcoin digital wallet, effectively ensuring that they could not be traced.

“Mr Ponle, are you there?” a court deputy asked on Thursday when he dialled into the hearing from federal prison.

“Yes, please,” he replied, subdued. He did not speak again.