Each time, we speak of Igbo presidency, some people raise objections. There are three types of objections;

2) That what we need is to have Biafra, our own country, instead of Igbo presidency or restructuring.

3) That the North will never agree to either Igbo presidency or restructuring.

Let us briefly examine these objections as follows:

2) As I have written here many times, we cannot have Biafra without humongous cost, if at all. Ojukwu understood this before his death. Ohaneze understood it as well. The current Igbo political elites understand it also. I have imagined the various scenarios under which Biafra could become a reality against historical reality. We need a total disintegration of the North to achieve that. While that is a possibility, it is not likely. As long as the North can still act in concert against the South (West and East), Biafra will not be a reality in the near future. This is more so if the South remains divided between the East and the West. So, seeing restoration of Biafra as an option is a miscalculation. It is not a practical option.

It is good, though, to continue to call for restoration of Biafra by a section of the Igbos. It serves the purpose of getting the North to agree to restructuring as an alternative. If we don’t call for Biafra, the rest of the country may not see the need to make any concessions to the Igbos.

The map above depicts the North and South of Nigeria. That was what Ojukwu meant when in one of his video recorded speeches he spoke of the preponderance of the North, specifically that the colonialists brought the North and the South in such a manner that the North is two times the size of the South and the South is split between the East and the West which have never acted in concert against the North. The preponderance of the North is not only a geographical reality. It is also a political reality. The North has more votes in the National Assembly to pass any law that requires simple majority. It has more states and local governments than the South. That is a true preponderance. You cannot wish that reality away.

Dealing with Nigerian situation, particularly anything involving the relationship between the North and the South, requires a delicate and skillful balancing, mostly of diplomatic nature rather than the military option. 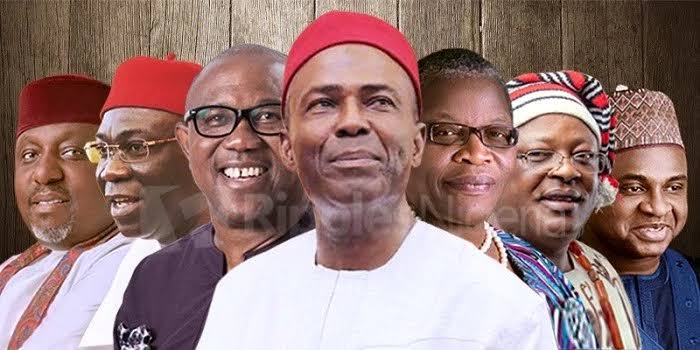 Conceding the presidency to the Igbos is such a necessarily diplomatic and delicate balancing act. It is necessary to cool down the boiling temperature that has been heating up the Nigerian polity, and the society at large. This will not be the first time such concession is being made in Nigeria. In fact, when the country was heated up over the unfortunate fate of M. K. O. Abiola, Nigerians conceded the presidency to the West, which led to the emergency of President Obasanjo in 1999. Another of such concession of the presidency is necessary, and this time to the Igbos.