A young man identified as Nnamdi Odo, a serving Councillor in Enugu State, has set the internet on fire as picture of him and his wife going to church on tricycle, fondly known as Keke NAPEP made it to social media.

Mr Odo who is also the Leader of Ohaneze Ndigbo Youth chapter of Enugu State in a chat with JOURNALIST101 said, his decision to use the tricycle for his wedding is to tell young persons that they don’t need to put themselves under pressure because they want to marry.

He said, “I’m doing this to tell young men that marriage should be according to their financial ability. There’s no need to allow anyone put you under pressure just to belong.

“I can afford to hire a car of my choice but I want to make a statement with this. As an Igbo youth leader, i owe it a duty not to mislead our young people. Marriage is between you and your wife, not a societal contest.”

He advised young persons to marry based on their conviction and do what’s within their means alone. 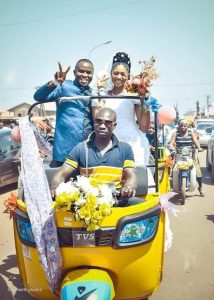 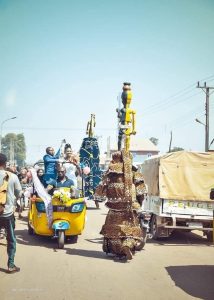