Due to selfishness; we have forgotten how to put collective interest before a sole interest. When men were men and life was without bitterness; in a contest, people surrender to the best but due to want and selfishness, we fight for ourselves and not the people anymore.

Former senator Ohuabunwa has been in the senate, but was unable to influence the leadership of the senate or politick his way into being a significant figure in the red chamber to attract infrastructural attention. It takes experience and high wire-connect to politick oneself into an influential position in the red chamber to benefit his people. As a Chief Whip; senator Orji Uzor Kalu attracted and will attract more dividends to the people of Abia North. In this case; Orji Uzor Kalu remains the best man for the job because he has everything needed to attract and deliver.

There is a wider belief that politicians in Nigeria contest elections for financial gain, but that cannot be said of Orji Uzor Kalu. It can be fairly said of his opponents, but not the amiable senator who has proven his involvement in politics to better the lives of his people. Long before venturing into politics; Orji Uzor Kalu had become a billionaire and financing politicians to ensure he attracts infrastructure and other social amenities for his people.

Nevertheless,; Ala-igbo needs Orji Uzor Kalu more than anything in politics for her political survival. To survive in politics; mainstream politics is the key, and Orji Uzor provides us with that golden opportunity. The senatorial ambition of Orji Uzor Kalu remains a pathway for the Igbo political salvation, and this is why I expected his opponents to have stepped down for the sake of our people.

Orji Uzor Kalu as a Chief Whip has the opportunity to become the senate president of the federal republic of Nigeria, a position that draws us closer to the apex office we have been longing for decades. If Ohuabunwa and other opponents have the interest of our people at heart, they would willfully step down for the man of the moment. Orji Uzor Kalu is our gateway to political salvation.

However,; stepping down for Orji Uzor Kalu might not be possible due to selflessness is a costly virtue nowadays, but the people of Abia North can settle the matter amicably. The people of Abia North must rise to the occasion and step down the opponents of OUK to pass a clear message of hope. The way to do it is simple; keep your voters’ card safe and on Election Day, go to your various pooling booths and massively vote for APC.

We cannot continue to scramble, fumble and tumble for opposition. APC is the mainstream party and the only train to our political salvation. We need to build up to our moment; so we could be able to seize the opportunity once it comes. OUK must return to the senate for us to have a genuine chance to achieve our long-awaited dream.

Four years of OUK in the senate has attracted infrastructural upgrade and social amenities. No senator has attracted much the senator attracted, and nobody has done or can do what OUK did for the people of Abia North since he ventured into politics. In no distant time; the people of Abia North will properly step down those that have refused to willfully step down for their collective interest. 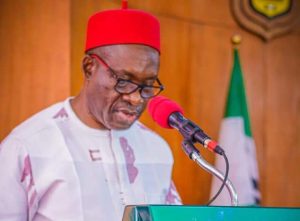 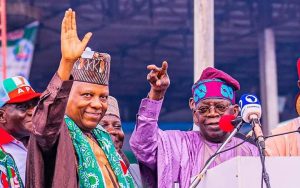