Ezenwafor, immediate past Senior Special Assistant to ex-governor Obiano of Anambra State on Politics and Strategy, emerged as the LP faction’s candidate at a national convention held in the Garki area of Abuja.

He is also said to have worked with Peter Obi, as his Chief of Protocol during his first term as governor of Anambra State.

However, In a statement which a copy was made available to Newsband, Ezenwafor said he is pulling out of the race based on personal reasons.

He said, “I hereby withdraw from the forthcoming election in 2023.

“After consulting my supporters nationwide, I decided to withdraw for personal reasons.

“I regret any inconveniences my withdrawal might cost out party.

“I thank the leadership of our great party for giving me the opportunity to serve Nigeria.

“Thank you and God bless you all.” 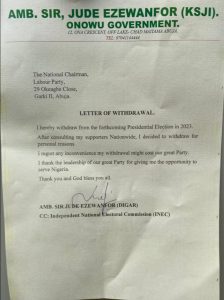