A former governorship aspirant on the platform of the All Progressives Congress (APC) in Rivers State, Senator Magnus Abe, has informed his supporters that he will be on the ballot, urging them to come and work with him.

This is coming after he described the party’s primaries held in the state last month as a charade.

Abe who is a former representative of the Rivers Southeast senatorial district at the national assembly, has insisted that his name will be on the ballot sheet for the 2023 governorship election.

Recall that Abe on June while addressing newsmen against the rumour that he has dumped the party, explained that he would not participate in a process that is not fair and transparent but said he is still a member of APC.

But a source from Rivers State told Newsband that there is pressure on the lawmaker by some stakeholders in the state to defect to Labour Party as this is the only way he can achieve his governorship ambition.

The source also said that consultation is ongoing and the senator may make an official announcement in respect to that.

Meanwhile, Abe who has been in a running battle with the former governor of Rivers State and minister of transportation, Rotimi Chibuike Amaechi over the soul of APC in the State, this morning through his official Facebook page announced again that he will be on the ballot for the gubernatorial race. 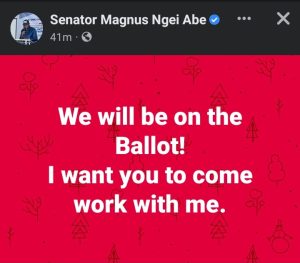 Amaechi was accused of influencing the party’s primaries which produced his ally and business mogul, Tonye Cole as governorship candidate of APC in the state which is reportedly against the wish of party members.